Upload an image from this species Register new species

Clownfish and its mutualism relationship with anemones 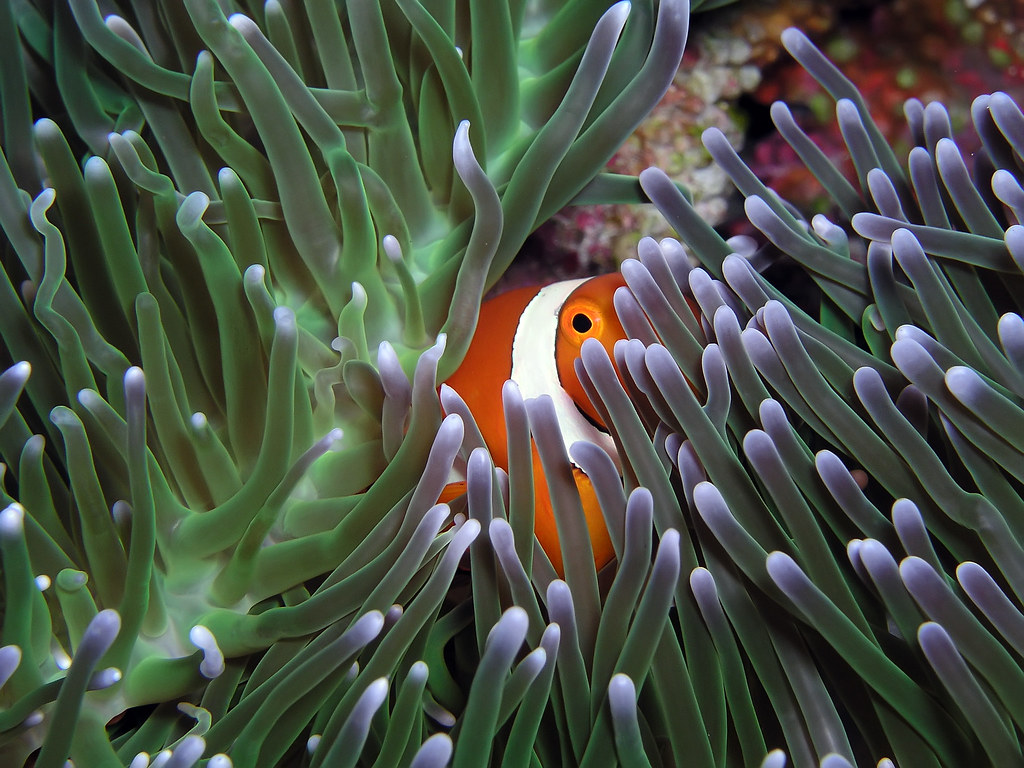 Clownfish have a symbiotic relationship with anemones. Image by  Wade_Lehmann

Clownfish (Amphiprion ocellaris) are colorful fish with shades ranging from yellow to orange, brown or pink, but thanks to the success of the movie "Finding Nemo" we always picture them by their most common color combination: bright orange with white stripes surrounded by thin black lines.

Clownfish has its habitat in poisonous anemones, where they live, take shelter, breed, feed and spawn, although they only live in 10 of the more than 1,000 kinds of anemone that exist. By a curious quirk of nature this small fish is able to live surrounded by the stinging tentacles of its host using them as a defense mechanism against predators, but also as a source of food.

The colorful clownfish attracts larger fish that try to eat them but when they make contact with the anemone they get paralyzed and are devoured by it. The remains of the fishes are later eaten by the clownfish and at the same time the anemone gets clean, leaving it in perfect condition for the next prey. Another benefit that the anemone gets from this relationship is a better oxygenation of its tentacles as the clownfish swims through them, providing more and better water flow.

This beneficial relationship that both animals have is called mutualism. The clownfish do not need anemones to survive (as demonstrated by their remaining years in aquariums without the presence of anemones) nor anemones die without the help of the clownfish, but they have found in this collaboration an easier way to survive. The clownfish is not born immune to anemones, they generate mucous at birth and during its lifetime that helps them immunize.

Another fascinating skill of these striking fish is its ability to change sex. They are hermaphrodites and all of the are born males but the oldest specimens of the colony become female to be fertilized by the next male  in the hierarchy, just one. When the female dies, the next in age, the dominant male, mutates to female to mate with the male following the hierarchy, repeating the process over and over again.

After saving the eggs for 3 to 5 days around the anemone, eggs hatch and the group takes cares for the pups until they reach sexual maturity. The clownfish, far from its image of kind fish, are highly aggressive territorial fish that do not hesitate to attack if they or their progeny feel threatened. Even if its guest is attacked, like in the case of butterfly fish that feed on anemone polyps, they will be aggressive to them. Pink clownfish, very aggressive when looking after its colony. Pic by Ken Traub

Clownfish have few predators in the ocean because of their relationship with anemones. Their biggest threat are humans, who capture these animals as decorative motifs, to the point of robbing the population in some areas of the Great Barrier Reef. Very far from understanding the message of the movie "Finding Nemo" (unhappy fishes confined in aquariums struggling to return home) many parents bought their children clownfish and others who appear in the film, as the Moorish idols, to decorate their rooms. Free clownfish live up to 10 years, in confined waters they don't reach 5 years old although they reproduce easily in aquariums.

Clownfish live in warm waters around the "Coral Triangle"

The male clownfish reaches up to 11 centimetres while females grow slightly larger. Their habitat are the warm waters around the coral reefs of the Coral Triangle and the Red Sea, at depths of about 15 meters, with most of its presence in Bali (Indonesia), the Philippines, Malaysia and Australia.

We also recommend you

This species has not been registered in a dive site yet..
﻿