The sinking of the Principe de Asturias: a Titanic you can dive in

The early twentieth century marked the golden age of ocean liners with the launching in 1906 of the RMS Lusitania. We were entering in a second industrial revolution that allowed technical breakthroughs in transport and marked the birth of big business empires in both sides of the Atlantic.

The need for cheap labor (or slaves directly) favored large migrations from Europe to America, requiring these large ships to be able to carry hundreds of the richest businessmen and artists of the era "on top of" thousands of the poorest Europeans, crowded into the holds. All of them in search for new opportunities across the ocean. The RMS Lusitania in 1907. Source Wikipedia

During the early years of the twentieth century the great ocean liners were popularized by two companies, the Cunard Line and the White Star Line, who competed to build the most luxurious boats, with more capacity and, of course, with the capacity of being unsunkable. These prodigies were reason for pride for their countries (mainly British) and for the owners, who through these liners were able to prove who was putting more effort in industrial development. It was a moment that we certainly could compare to the space race that began half a century later.

Those who usually read this diving blog know that we have a predilection for wreck diving: we talked about the Red Sea wrecks, the impressive USAT Liberty and even about some hidden shipwrecks in the Spanish coast. Today we bring you a Spanish sinking that may seem a little frivolous to call the "Spanish Titanic" (as many historians do), but you’ll see it might be not. The Príncipe de Asturias was a ship owned by the great Spanish shipping company at that time, the Naviera Pinillos, and has many similarities with the world famous RMS Titanic. Both vessels were equipped with exquisite luxury decoration, were launched in the same decade and had a very short life (the Príncipe de Asturias little over a year, the Titanic did not finish its first trip). Other similarities are that in both sinkings famous intellectuals and some of the greatest entrepreneurs of both England and Spain died; or that the two ships were technological marvels for the time described as “unsinkable”. There is one big difference between the Titanic and the Príncipe de Asturias: in the "Spanish Titanic" you can actually dive. It is certainly a very difficult dive, but still possible.

But even though these disasters were somewhat common, it is still striking that the sinking of the Príncipe de Asturias was muted. But keep in mind that we are talking about an era where the race for the prestige of countries and the shipping industry was vital,especially if we take into account that we were in the middle of First World War

The Prince of Asturias was built in the shipyards of Kingston, England, by the Russell Co. and begun service on August 16th 1914 led by one of the most experienced capitains in the fleet of Pinillos, Jose Lotina Abrisqueta. The Príncipe de Asturias performance during his first months of service was remarcable. Received praise in the international press and amply fulfilled the expectations its owners had put in the ship. 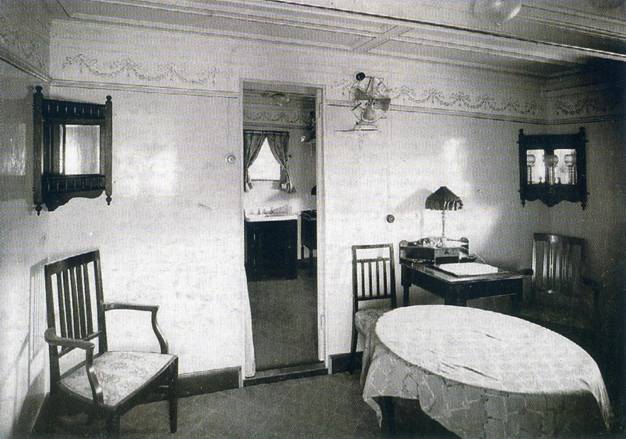 The Príncipe de Asturias was also a reason of pride for the Spanish Merchant Marine by counting with a 160 meters long liner and 20 meter long sleeve that could carry 150 passengers in first class, 120 in second, 120 in third and 1,500 immigrants (who were not considered passengers and were considered little more than cattle).

The luxuries that first class passengers could enjoy on board were virtually endless. It highlighted a dining room made of ​​Japanese oak wood and walnut frames chaired by an elliptical dome decorated with luxurious crystals. The richest passengers could access a music room that had silk tapestries, gold trim and mahogany furniture. This lounge had a magnificent piano built especially for use on board. Besides that room it also had a writing room and a library. No doubt the Prince of Asturias met the standards of the transatlantic vessels of early last century. As we say, a luxury accessible only to large businesses owners and artists. 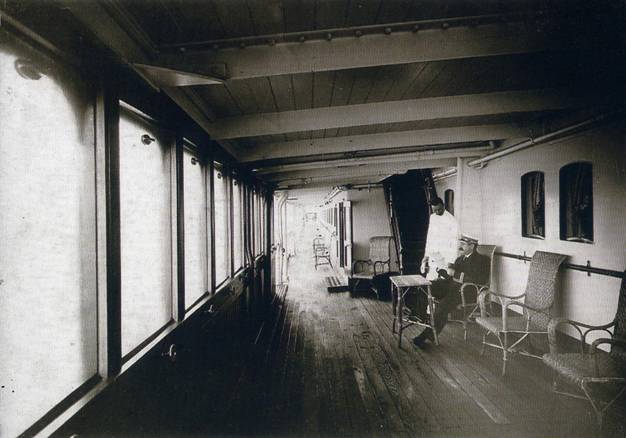 Gallery or promenade deck. The windows protected from winds resulting from navigation or bad weather

On the stern the smoking-room for first class was located, with walnut paneling where the chairs and the sofas were covered with morocco leather. The kitchens were equipped with the most modern equipment and the storerooms also had electrical equipment to clean the knives and even dishwashers, something very uncommon then. All details were careful treated, for example, the main kitchen was located on the upper deck to avoid the odors from penetrating the passenger cabins and lounges. 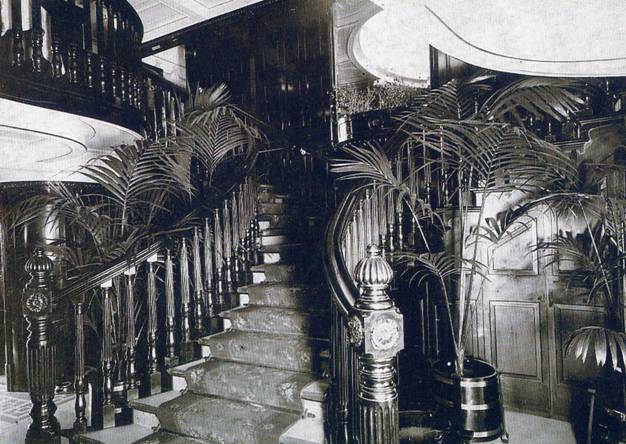 The last voyage of the Spanish Titanic

The tragic end of the Príncipe de Asturias began on February 17th 1916, a year and a half after coming on duty and after five successful trips across the Atlantic Ocean. A few days before its departure from Barcelona to Buenos Aires, several thousand tons of tin ingots, lead, iron and copper were introduced in their holds, besides another curious cargo: 20 bronze statues of more than 800 kilos of weight each, destinated for Buenos Aires to commemorate the centenary of its Independence and made ​​by the Spanish sculptor Agustín Querol. We will return later to these statues, very important in their subsequent recovery efforts .

The Príncipe de Asturias sailed that evening of February 17th with its cargo, 201 passengers and 193 crew. The ship ​​stopped in Valencia, Cadiz and finally, Las Palmas on the 23rd completing the rest of the passage. Although it could carry nearly 2,000 people, 588 officially embarked, almost half immigrants, and 5,000 tons of goods (legend says that among those goods there was a safe full of gold for the Argentine government) and which also kept the jewelry of the first class passengers valued at several millions today and a Renault 35 HP, 1911.

After over a month's journey without any issue, the Príncipe de Asturias is about to reach the Brazilian coast ready for its first stop in America. On March 4th, on a foggy day,a storm unleashed which prevented the Príncipe de Asturias to get close to the port of Santos, as scheduled. This unintentional deviation from the course, planned to reach the north of the island of Buzios, directed the ship, on the morning of 5th of February, very close to the coast, crashing against the reefs of Punta Pirabura. The 16,500 tons of transatlantic jumped out of the water by the collision. As it fell again, the entire bottom surface hits against the rocks. The Príncipe de Asturias is open from stem to stern.

Seconds after the collision the bow is submerged and the stern rises with propellers still turning out of the water. The hull was opened in the engine room allowing the entry of water directly into the boilers, exploding at 4'15 hours. Water flooded the boat in seconds causing a general failure in the electrical system making it impossible to send a distress message by telegraph. In less than five minutes the ship heeled over so that made it impossible to launch the lifeboats. For many passengers on deck (the few that were not in their cabins trying to sleep) the only salvation they saw was to jump overboard, dying drowned or smashed against the rocks.

In just five minutes most of the nearly 600 people who were aboard died. The ship sank with 445 people inside. 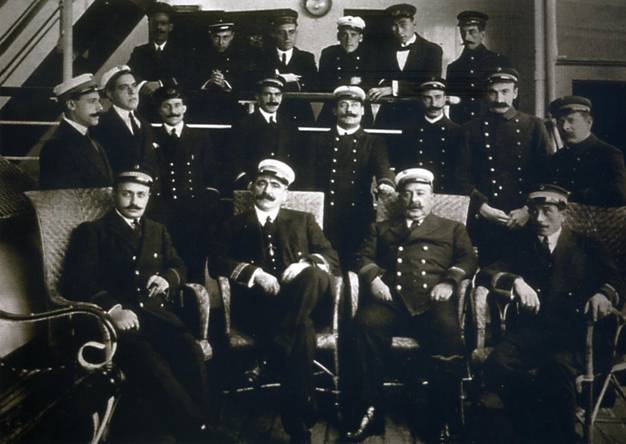 Legend has always pursued this sinking and the reasons for its collapse have never been clarified. On one hand some claim that a British warship torpedoed the Príncipe de Asturias to take down a group of Germans who were in the ship (remember we are in 1916, full World War I) . Others claim that the area where the accident happened has magnetic disturbances and the ship was actually loaded with tons of different metals facilitating it to get diverted from its course. Anyway, only 143 people survived the greatest maritime tragedy in Spain at the time.

Diving on the Spanish Titanic

After the terrible accident the remains of the Príncipe de Asturias were sunk and forgotten in front of Ponta do Boi until the mid 1950s when it became known that the cellars of "the Spanish Titanic" kept quite more things than a few bronze statues: 45,000 pounds of gold. Then a rescue operation in search for gold and jewels began. Because divers access was (and still is) very complicated and dangerous, they used dynamite hoping to get to the surface any valuable remains. Obviously this "technique" severely damaged the hull and many of the objects that remained on the wreck. In 1992 a plan was devised to recover the 20 statues for the famous Argentine monument traveling in the hold of the ship. The goal of the project was to donate them to the city of Buenos Aires and complete the memorial coinciding with the acts of the Quinto Centenario. These operations included new hull blasting but all they could find was one of the statues which today is exposed at the Naval Museum of Rio de Janeiro. It seems that the Príncipe de Asturias was reluctant to reveal its mysteries. Map of the wreck of the Príncipe de Asturias. Source  http://www.naufragiosdobrasil.com.br

Even today different expeditions got into the wreck of the Príncipe de Asturias, it is considered one of the most difficult dives in Brazil. On one side, the sea conditions are usually very harsh in Pirabura, with strong waves, wind and cloudiness. Just to access the dive area you need to wait for special and unusual weather conditions.

The visibility usually does not exceed 3 meters, with the remains beginning to reveal themselves at 15 meters deep and go up to 48 meters. The wreck lies almost parallel to the coast, with the stern and bow separated by the use of the dynamite. In fact the boiler suffered a strong explosion and it lies far from its original position. Beyond 30 meters deep lied the propeller shaft, which was recovered in a rescue operation.

According to some divers who have worked on several expeditions, it is believed that you can still find inside more than half of the cargo that left Barcelona. Access inside the boat, although possible, is very dangerous. In the bow you can see a 45 meters in long hole which caused the rapid sinking of the Príncipe de Asturias. Much of the ship is sunk on a sandy bottom and you can see machinery, boilers or copper fittings.

Different Brazilian diving media have gone into this wreck and talk of the presence, moreover evident, of human bones like femurs or skulls. The difficulty of access makes them to still be inside the ship. It is said that it is possible to see even the rest of the statues, inaccessible to the recovery effort.

Although we can find many dishes and passengers items, they certainly they have nospecial archaeological value but this wreckage and all that still keeps inside has enormous cultural and historical value, an example of a life time to help understand today's society. If the wreck had better visibility and easier access we would be talking, without a doubt, about one of the best and most interesting wrecks in the world.

Some other wreck diving articles we recommend you