When we speak about dolphins we usually identify these cetaceans with the bottlenose dolphin (Tursiops truncatus) mainly for its abundant presence in marine parks. Those who are a little more familiar with the marine environment may know other dolphins like the common dolphin (Delphinus delphis), the striped dolphin (Stenella coeruleoalba) or pilot whales (Globicephala) genus. Surprisingly there are 34 species of dolphins, very different from each other. We can find dolphins that live attached to the South Pole, other that inhabit rivers where visibility is almost zero and some other so rare that even lack of dorsal fin.

Here you have 10 rare dolphins that will give you a much broader view of these mammals.

The hourglass dolphin (Lagenorhynchus cruciger) is a small and elusive cold-water cetacean that lives in the southern coasts of Argentina, Chile and the South Pole. This dolphin was first identified in 1986 and since then has rarely been seen. It is believed that there are about 140,000 of these dolphins which measure up to 1.80 meters in length and weigh up to 120 kilograms. The southern right whale dolphin (Lissodelphis peronii) is a curious dolphin with no dorsal fin. There are only two dolphin species with this feature included within the genus Lissodelphis. This dolphin of about two meters in length that gathers in impressive groups of up to 1,000 specimens swimming in the cold waters of the southern hemisphere that they occupy. You can see this awesome animal off the coast of Chile, Argentina, South Africa, New Zealand and Australia.

The tucuxi (Sotalia fluviatilis) is a dolphin that inhabits the Amazon basin and shares habitat with the famous pink dolphin of the Amazon (Inia geoffrensis), but are not directly related. There is another variety of Tucuxi dolphin, bigger and marine, which can be found along the coast of Brazil to Costa Rica.

The Chinese white dolphin (Sousa chinensis) is found, although it may appear by its name, in a wide area of ​​the ocean, with populations in the South China Sea and the Coral Triangle around to southern Australia. This dolphin belongs to the genus Sousa characterized by having a hump. It is believed that there are about 10,000 specimens and that their population has been reduced by over 60 % in less than one generation. 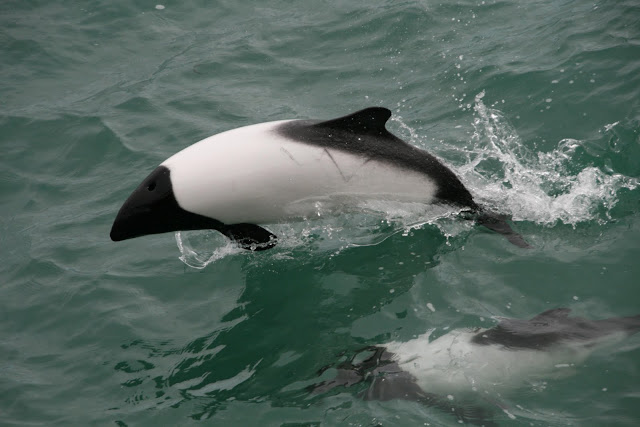 The Commerson's Dolphin (Cephalorhynchus commersonii) inhabits two small areas in the southern hemisphere, separated more than 8,000 km between them. On the one hand we can find this dolphins in the Strait of Magellan, near the Falkland Islands, and on the other in the Kerguelen Islands in the Indian Ocean near South Africa. It's a little known about this cetacean species, in fact the Kerguelen Islands population was discovered about 60 years ago and it is believed that the total population will be about 3,500 specimens.

The Irrawaddy dolphin is one of two species belonging to the genus Orcaella, dolphins that look like the belugas and are related to orcas. This species has a large melon (odontoceti organ used for echolocation) and can be found from the Bay of Bengal around China Sea and northern Australia. Despite its name (Irrawadi is a long river in Birmania) is an oceanic dolphin found in estuaries of rivers like the Ganges or the Irrawaddy in Burma.

The Hector’s dolphin is one of the rarest cetaceans. On one side, is the smallest of them all, measuring just 1.4 meters long and it is endemic to New Zealand. Another feature that makes it unique is that it has two subspecies, Cephalorhynchus hectori hectori  and Cephalorhynchus hectori maui that inhabits only one of the two islands of New Zealand and is estimated at about 100 copies left, one of cetaceans most threatened with extinction.

The melon-headed whale (Peponocephala electra) is related to the pilot whales and killer whales. This dolphin is a very difficult to see as ventures into open water and deep seas in search of squid, its main food. They live in tropical waters around the world and often create groups of 100 specimens, being observed up to 1,000 of these dolphins together in Hawaiian waters. The dusky dolphin (Lagenorhynchus obscurus) is a very acrobatic cetacean that can be found in the Southern Hemisphere coasts, in Argentina (where is quite common), Chile, South Africa and New Zealand. They can reach over two meters in length and weighing 100 kilos.

The Risso's dolphin (Grampus griseus) is a large dolphin that reaches 3.5 meters in length. It is easily recognizable by its rounded head and longitudinal white marks that seem scars. This pelagic dolphin lives in areas with depths up to 2,000 meters where they can find one of their preferred prey, large squids.

Other cetacean articles we recommend you