What is the Coral Triangle and how does it affect you Aerial view of the Solomon Islands, the eastern limit of the Coral Triangle. Pic by Slider_1980

Probably the Coral Triangle is a complete stranger to you. You may not know where it is or how its good or bad health can affect you.

To realize the value of the Triangle think about the ocean as a single living being and in the Coral Triangle as its heart. The Triangle receives two nutrient-laden currents (the North Equatorial Current and the South Equatorial Current) that feed the coral reefs and the thousands of species of animals that live there, from the smallest imaginable to the largest predators.

In turn, the Triangle, by means of the Kuroshio Current, sends more nutrients to the Pacific Ocean to feed all kinds of fish and large mammals travelling on its way to cold northern waters.

The Triangle also helps life flow southwards towards Australia through two streams (the Leeuwin Current and the East Australian Current) that sudrround it, sending food to the famous Great Barrier Reef of Australia. Finally en route to the Indian Ocean through the Indonesian throughflow, the Triangle sends big fish and microscopic food to the coast of Africa.

Thus, the Coral Triangle receives two rich currents that create the most biodiverse area of the ocean to distribute that wealth to almost the entire planet. As in all other living beings, if the heart fails the whole body dies from lack of nutrients. If the heart of the ocean dies we will be in big trouble. The Triangle not only provides food for the whole ocean distributing it through the currents but it also allows the main coral reefs, seagrass beds and mangroves to be healthy, allowing us to breathe.

Contrary to what is commonly believed, 80% of the oxygen we breathe comes from the ocean, mainly from underwater vegetation, not the forests.

The 9th of June is the International Coral Triangle Day and we would like to show you the importance of this forgotten corner, which is much more than a paradise for divers, and how its deteriorating health affects the daily lives of all human beings.

What is the Coral Triangle?

The Coral Triangle is a vast territory formed by different seas and thousands of islands stretching about six countries of Southeast Asia and the Pacific: Indonesia, Malaysia, Philippines, Papua New Guinea, Solomon Islands and East Timor. In total it covers 6 million square kilometers with a population of over 120 million people surviving directly from the food and security the Triangle provides them. There are even people living in the waters forming the Triangle, such as the nomadic Bajau Laut tribe. Despite its name, the Triangle is more than coral. Lots of extensive seagrass beds and mangroves can be found in this area, which makes this triangle even more value as it is the area with the greatest marine biodiversity in the world. This area is so extraordinary that there are single reefs bigger that all the coral reefs in the Caribbean. 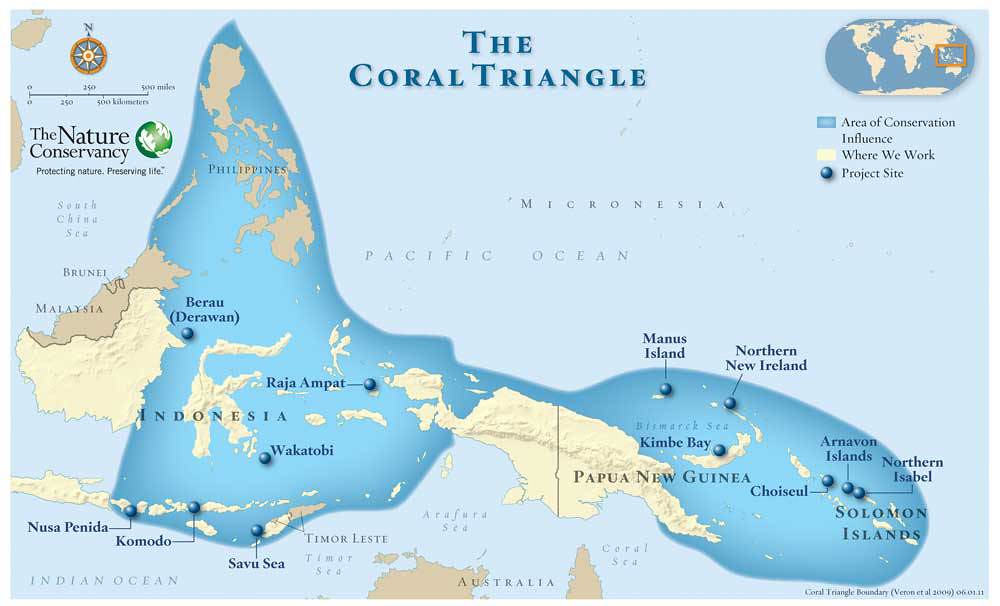 Map of the Coral Triangle and the 6 million square kilometers that covers. Source wikipedia

Why is the Coral Triangle and its conservation so important?

The Coral Triangle, besides being the “pump” that distributes food all over the ocean, is the home to over 2,000 species of reef fish and 37% of the world's total reef fish. It is a vital spot in the planet for the survival of sea turtles as 6 of the 7 species of turtles nest and feed in this area; and we know that turtles, like sharks, play a key role in balancing the marine ecosystem.

Adding to that, 75% of the coral species in the world can be found here, hosting 30% of all corals on the planet. And, to be fair, to this percentage we should add that of the reefs of the Great Barrier Reef Australian that survives, as we have seen, thanks to the nutrients that it receives from the Triangle.

The Triangle is known as "the Amazon of the seas" not only for being the underwater area that hosts the greatest biodiversity, but also for its invaluable contribution of oxygen to the atmosphere. Coral is much more than an animal that provides security for goldfish and the coasts facing tsunamis and strong waves. Within the corals polyps lives a microalgae, called zooxanthellae, which through photosynthesis provides the coral sugars and oxygen. But the oxigen that is not used by corals reaches the atmosphere for you to breathe. Thanks to the algae, seagrass beds and the zooxanthellae (who also live in other organisms such as sponges and anemones) we can breathe. Losing the Triangle would unbalance the ocean and literally breathing would become increasingly difficult.

What's more, the Triangle is directly responsible for the daily feeding of millions of people. A single square kilometer of healthy reef coral in the Triangle produces more than 45 tons of food a year, 35 of them fish. We are talking about a virtually unknown area that generates more than 200 million tons of food each year, a good source of food for all considering that, according to FAO, humans annually produce about 10,000 tons of food.

The Triangle is also sometimes called "The tuna nursery" because it offers a perfect spawning and protecting area for the young tuna (as it has been doing long before we were here). It is the starting point of the migration routes of species of great commercial interest. In the Coral Triangle tuna species that mainly spawn here are the bigeye tuna (Thunnus obesus), the skipjack tuna (Katsuwonus pelamis) and the yellowfin tuna (Thunnus albacares). The Coral Triangle provides them shelter and a food area suitable for them to grow enough to be able to take on tough migration routes to the Pacific and Indian Oceans in search for food. The importance of tuna lies not only in food for humans or large fish or on their "responsibility" as balancing the ecosystem. A single adult tuna can lay up to 45 million eggs each year, the vast majority eaten by other fish and marine mammals, which are distributed throughout the ocean from the Triangle.

Tuna has been fished by local communities in the Triangle for thousands of years, using traditional fishing techniques that did not affect at all the balance of the tuna populations. But today, and for decades, tuna, on arrival at the Pacific are met by huge tuna fishing vessel able to capture more than 200 tons of tuna per day. The problem with these techniques is not only that they exhaust tuna populations to the near collapse of some the species, it is that besides adults they capture millions of juvenile specimens who have not yet come to mate and they will not return to the Triangle to repeat the cycle and continue feeding the ocean. Keep in mind that a fifth of the tuna consumed in the world comes from the Triangle.

According to WWF over 300,000 tons of juvenile tunas from this area are collected every year. If we leave these juvenile fish mature, their market value would be $1,2 billion, tripling the current price. If only for the money it generates and that seems to be the only language the politicians speak, it is worth paying attention to. The defense of the Coral Triangle requires more comprehensive protection policies if we want tuna to continue to exist and to continue feeding the planet.

Why is the Coral Triangle endangered?

Several reasons are putting this gem in serious danger. On the one hand the area where the Coral Triangle is, in the center of the Asia-Pacific, is one suffering the fastest economic and industrial growth. The sustainable fishing practices have then given way to uncontrolled fishing by growing local fleets that sweep away all kinds of fish. They do not wait for tunas to even reach the Pacific or Indian Oceans. Large fishing boats are being introduced in the Triangle increasingly capturing fry. In addition, more reef species are being caught, damaging corals indirectly since the lack of these fish, which feed on algae, causes them to multiply freely blocking the entry of light into the reef.

Besides the increase of industries that use the ocean as a dump also affects the health of the Triangle and its corals. Economic growth has brought new chemical industries to some parts of Indonesia and the Philippines that throw waste into the ocean damaging marine life quickly and severely. This, toghether with a construction boom that is using the ocean as a dump, pullutes the sea through thousands of tons of waste ore clouding the water making impossible the entry of light and making photosynthesis impossible by zooxanthellae and killing the corals.

Finally, global warming, which is leading to the gradual death of the corals by water acidification and a rise in sea level also harms corals, which as we know they need sunlight.

There is much we can do to help the Triangle to survive, like reducing CO2 emissions, consuming sea species not suffering from overexploitation, reducing the use of plastics or supporting political options looking for the ocean defense. And you can also support directly organizations like WWF who are struggling in specific campaigns for the Coral Triangle survival.